When Celine first arrived to the mangroves of Demak, she was shocked to see that their roots were buried by loads of plastic. She decided to investigate whether mangroves can adapt to plastic pollution, or whether they will be drowned by it. You can learn more about her findings, and their implications for mangrove protection in the following interview:

Her full scientific article can be found below:

Waves are one of the most important processes in driving coastal erosion; they often tend to “nibble away” the sand or mud at the coastline (although it is less well known that they also build up coastlines by transporting sand and mud towards the coast). That is why we want to know the exact wave conditions in our study area: how high are the waves, where do they come from? So, we decided to anchor a WaveDroid a couple of kilometers off the coast of Demak to measure the waves. A WaveDroid is an innovative type of wave buoy, a floating device that uses an accelerometer (the same as in your smartphone) to measure the motion of the sea surface, so all the motions caused by waves. 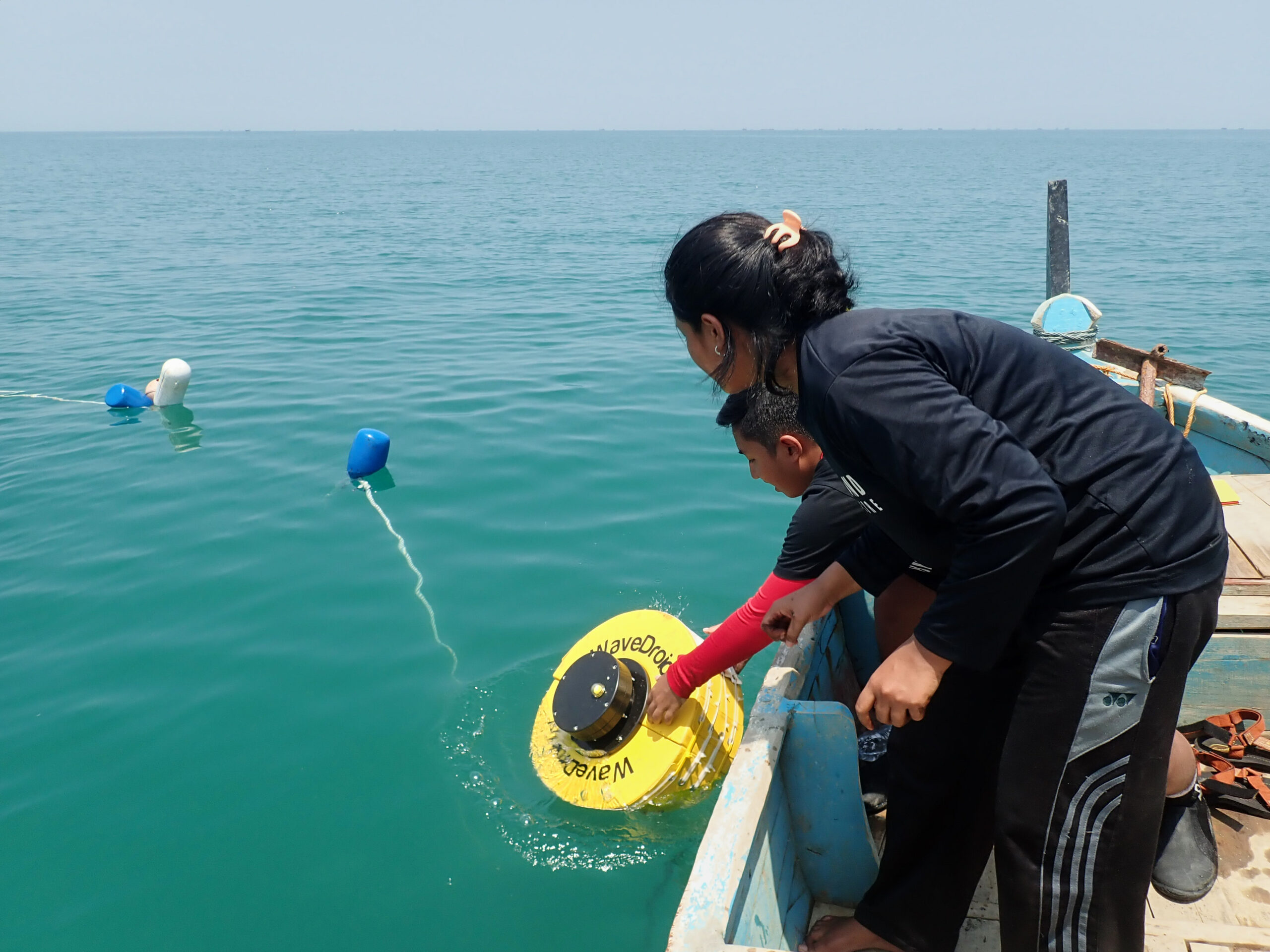 A nice feature of the WaveDroid is that it sends an update every half hour (via mobile internet or satellite connection) with live wave conditions, and its GPS coordinates. We never suspected exactly how useful it was to know the WaveDroid’s location, but at two occasions we have found ourselves on a treasure hunt on the Java Sea to find our lost wave buoy.

The track of the WaveDroid between 31 December and 12 January, drifting in the Java Sea. (c) Silke Tas

The first time, the anchor line must have broken during a storm (after it was already weakened by getting caught in fishing nets). To complicate the search, it floated further away from the coast, and only managed to connect to the internet during the night (when the mobile network was more stable due to lower demand). Multiple search trips were unsuccessful, until after an adventure of 12 days, the stray WaveDroid was finally picked up by local fishermen, and we could trace the buoy back to the home of the fishermen. The remains of the anchor line after drifting in the Java Sea for two weeks. (c) Muhammad Helmi, UNDIP

The second time, the WaveDroid was actually caught by a fisherman, who thought the buoy had been abandoned at sea and wanted to re-use the floaters for fishing. Unfortunately, once the WaveDroid was inside his home, it could no longer make satellite connection, so its last known position was just outside the village and a first trip to the village in search of the buoy was unsuccessful. Luckily, a contact person of UNDIP (Universitas Diponegoro, a Semarang-based university we collaborate with) in the village, was able to find the buoy. They even gave us some freshly caught fish when we came back to collect the WaveDroid the next day! 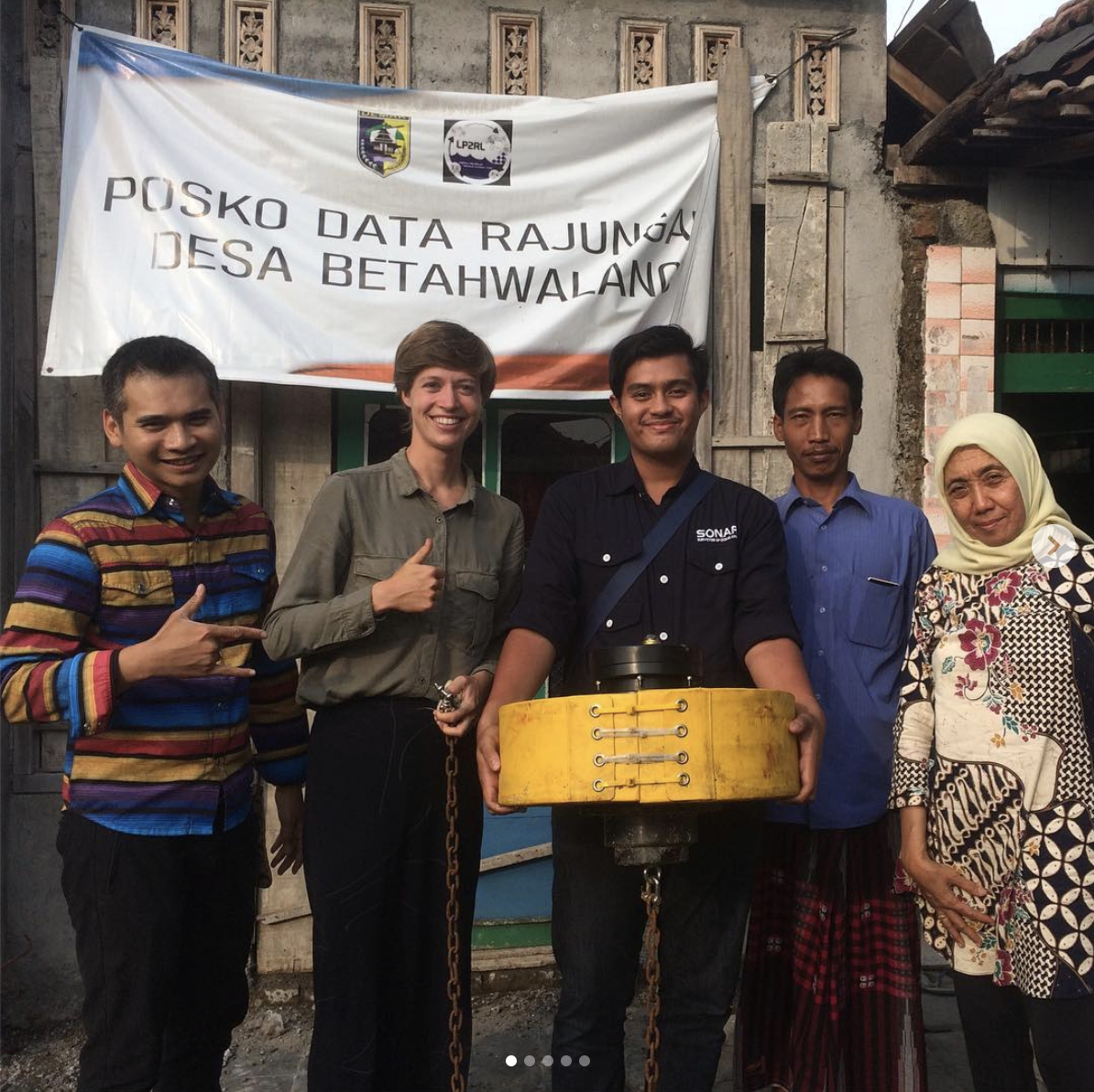 The WaveDroid adventures are the perfect illustration that no matter how meticulously you plan and prepare field work, you cannot foresee how it all turns out from behind your desk in the Netherlands. It turned out that the ideal location for the WaveDroid was in popular fishing grounds. After the second time we lost the WaveDroid, we asked the fishermen where they would recommend to anchor the wave buoy, so that it would not get caught in their fishing nets, and they recommended an old anchoring location for big ships off the harbour of Semarang. A valuable lesson: adapt and use local knowledge. The WaveDroid in action, measuring waves in the Java Sea. (c) Silke Tas

Over the last years, Silke has investigated how cheniers, a special kind of sandbanks, travel along the muddy mangrove coast, since they function like “sand barriers” that protect mangrove forests from storms. Her fieldwork adventures involved crawling in the mud to get measurements, sometimes renouncing to them if a poisonous snake chose her instrument as their holiday spot, or searching for stolen equipment in a scooter. You can learn more about her story in the following article of Stories of Science, written by science communication student Emma Blanken.